Let’s just say that when Audra Lalli comes in at 4:30 a.m. to start her day at Mad Hatter Bakery, she calls it “sleeping in.”

All that hard work pays off though. Mad Hatter was the top votegetter for the Favorite Bakery category, cementing a seven-year winning streak. Lalli is known for her ability to reproduce artwork from wedding invitations, company logos and other designs onto caketops. She whips out an iPad to show me dozens and dozens of photos showing proof of her perishable artistry. Hint: If you really want a solar system on your cake, know up front that black frosting temporarily colors the tongue.

So we were thrilled when Lalli agreed to take a break from her long workday to pose for photographer Michael Salerno for this week’s cover for the annual Love Awards issue. In characteristic Energizer Bunny fashion, Lalli over-prepared, making three cakes for us to choose from for the photo.

After the shoot, Sherman Publishing employees devoured the cake (and uniformly agreed that they loved Mad Hatter Bakery.)

The Love Awards are the frosting on the cake, an acknowledgment each year of the local people, places and things that win over the hearts of our readers. This year we included some new categories, retired a few others and had a portion of our ballot available exclusively online. Over 4,000 votes were cast.

Please join us in saluting Lalli and the 81 other Love Award winners for being awesome when we gather Thursday, June 29, from 7-10 p.m. at @ the Deck on Waites Wharf in Newport. Tarot Talk columnist Maribeth McNair will be there to deliver her expert readings. And you can clown around and have fun in front of the camera for a group photo with WRIK Entertainment. Great raffle prizes and signature cocktails by Brockmans Gin will also be part of the festivities. 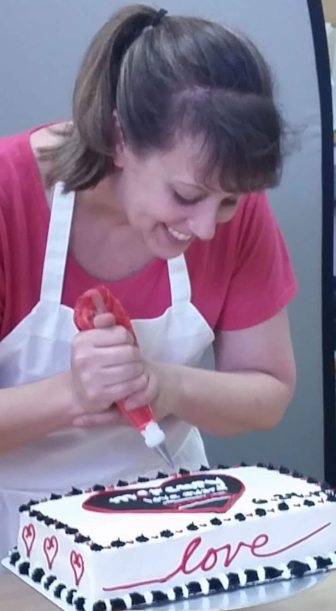 It’s all in the mixing. A good Irish soda bread is mixed by hand to achieve the right texture. Not too dry. Not too heavy. Photo by Dan McManus

Audra Lalli bakes up to 400 loaves of Irish soda bread during March at Mad Hatter Bakery on Broadway in Newport. Photos by Dan McManus

As a kid, I knew what to expect on the dinner table every St. Patrick’s Day: Green. Sure, there was the obligatory corned beef and cabbage; but there were also green mashed potatoes. Green beans. My grandparents even had the humor to drop some green food coloring into beer. Yet there was one item that wasn’t always present and should have been, one that I only developed an appreciation for as I reached adulthood: Irish soda bread.

According to the Society for the Preservation of Irish Soda Bread (yes, there is such a thing; you can find them at sodabread.info), the dense loaf became popular in Ireland in the 1800s when extreme poverty necessitated food that was easy and cheap to make. Soda bread fit that bill, incorporating only soft flour (not requiring yeast, which wasn’t always available), baking soda (whence the bread gets its name), salt and buttermilk. The addition of raisins and caraway seeds came about later, though most of us think raisins when we think soda bread.

Audra Lalli, owner of Mad Hatter Bakery in Newport, has made soda bread into an art form. Initially stocked only during Newport Irish Heritage Month in March, Mad Hatter’s soda bread is now available year-round because of its popularity, Lalli said. Still, the bakery creates a total of between 350 and 400 soda bread loaves during the month of March alone.

“Some people say it reminds them of a scone,” said Lalli of the bread’s dense consistency. She received the recipe years ago from a boss at a Florida resort where she worked as a baker, but only the base ingredients were listed: butter, wheat flour, eggs, buttermilk, baking soda, baking powder, and a little sugar. Lalli had to figure out the amounts of each ingredient on her own. Now, her establishment offers a variety of round soda breads in three sizes: 9-inch ($9.50), 7-inch ($7.50), and individual or “mini,” about four inches across ($3.75).

“Some say the traditional way is with caraway seeds, and some say not,” Lalli said. “I make it both ways. Because we make it from scratch, we can put whatever we want in it.” That includes substituting cranberries for those with a raisin aversion.

The batter is mixed by hand (a challenge when dealing with solid butter), preventing it from being overworked, and baked in round cake pans on Mad Hatter’s vast rotating oven shelves, which evenly heat the bread. Lalli suggested that this method is perhaps to thank for her soda bread’s moist quality. The mixing process takes about 25 minutes, then about 30 minutes in the oven.

How does Mad Hatter’s interpretation of the time-honored Irish staple hold up to tradition? “Everyone says, ‘I have my grandmother’s recipe, and yours is the closest,’” Lalli recounted proudly.

“I like when people say ‘I hate soda breads,’ and I give them mine and say, ‘Try it,’ and then they come back for more.”

Such praise is justified. Mad Hatter’s Irish soda bread is substantial but not heavy, and not as dry as soda bread can be typically. The caraway seed version has a pleasant rye undertone without feeling like rye bread. Two sample loaves proved quite popular at the Mercury’s office, receiving positive reviews all around.

The “fun chaos,” as Lalli describes it, doesn’t stop after St. Patrick’s Day. St. Joseph’s Day, when all things Italian are honored, is only two days later, and Mad Hatter will make between 600 and 800 traditional zeppole pastries for the occasion.

For the last seven years, Audra Lalli, owner of Mad Hatter Bakery, has kept a secret from me; her Pumpkin Whoopie Pies.

Considered a New England treat developed by the Amish, (obviously before “make whoopie” became a popular phrase) Audra’s inspiration to start making these unique pies wasn’t regional pride but came from her best friend. Her BF used to come into her bakery all the time, pinching slice after slice of her cakes which soon developed into her freely spreading frosting on the pumpkin cakes. Realizing the potential for greatness, it snowballed from there.

Audra’s Whoopie Pie ($3.25 each) is cinnamon, vanilla butter creme spread thickly between two pieces of impossible-to-slice-on-your-own a.k.a. the very-middle-of-the-loaf soft, pumpkin cake and upon your first bite, melts into a cohesive, creamy mess in your mouth.

Lalli had no idea I was going to bring back the various treats she let me sample to a cohort of premenopausal women; but I did. Within minutes I acquired Mad Hatter Bakery eight new loyal patrons.

Unlike everything else I’ve sampled, Lalli offers her Pumpkin Whoopie Pie all year long, (recently making mini versions for a July wedding).

The graduation cake you designed was a bit hit! Thank you for taking the logos and creating a beautiful cake. I’ve told everyone that it was from Mad Hatter, your phone will be ringing off the hood for graduation cake orders!

I brought a Mad Hatter cake to a birthday party… another friend brought cupcakes from the famous Magnolia Bakery in NYC. The Mad Hatter cake was the crowd-pleaser hands down! Guests took one bite of the Magnolia cupcake and set it aside, then finished their slices of Mad Hatter cake and went back for seconds!